U16 and U18 AFL Female Talent Pathway Academies

Congratulations to the 15 girls from the Willoughby Mosman Swans JV  teams who were selected for the AFL Female Talent Pathway Academy program for 2019.

The 2019 cohorts will train from November 2018 through to April 2019 and will then trial for their respective AFL NSW/ACT teams. Well done ladies!!!

Season one of AFLW was outstanding. To be honest it achieved far more than the head honchos at AFL House ever anticipated.

The road ahead is looking rosy. However, there is one thing that will derail the momentum faster than a Bree Davey shirtfront.

And if the AFL and the local leagues don’t get it right, it will put a speed bump in the game that will slow it down for years

The issue I am talking about is coaching, specifically coaching girls.

Click here to read the article published by Nathan Burke.

This article appears in SEN Inside Football’s AFLW Special

THE explosion of women and girls playing Australian football is benefiting sporting clubs at every level, but is putting pressure on facilities.

“The added interest in women’s footy through the national competition (AFLW) and the success of the Adelaide Crows prompted a surge in interest to the point we facilitated competition for 47 women’s teams in 2017.”

Click here to read the full article published in The Herald Sun on Feb 2, 2018 by Craig Cook, The Advertiser.

But a new sporting shift is underway.

Independent girls schools have noticed an increase in AFL participation in male schools once dominated by rugby, and they are jumping on board.

This month, the first ever AFL Sydney Independent School Girls competition will kick off.

“In 2017, we saw a 78 per cent increase in female club football participation across New South Wales and the Australian Capital Territory, the fastest growing segment of our game,” Mr Graham said.

“This growth has allowed us to provide Sydney’s independent girls schools with the opportunity to play football in an organised competition, something that has existed for their male counterparts since 2013.

“It is great to have six independent girls schools taking part in the six-week competition, and it is a real credit to everyone involved in making this possible. 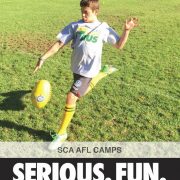 Conducted by our own Tim Barling – Head coach of U13, U14 and U17 Willoughby Mosman Swans and head coach of Riverview yr 9-10 teams.

The first ever AFL Sydney Juniors Under 12s Girls Competition was launched over the weekend with 20 new teams joining the Sydney Harbour contest for 2017.  Our Wildcats girls were there in numbers. Good luck girls!