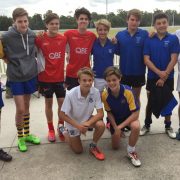 It was a big day for our Will/Mos boys after 72 boys from around NSW competed for the selection to the NSW Combined Independent School team. Every one of the Will/Mos boys made the first cut from 72 to 36 (poor Sam Austin was ineligible after a paperwork stuff up & for sure would have been selected).

From this 5 boys were selected into the team – Harry Garrett, Mike Read, Kale Gabila, Oscar Davis and James Larkey.

Gus Miller still only 13 yrs old was absolutely sensational and Seb Krimmer kept the arguably best forward of the carnival to one just 1 x goal when played on him, Jude Yates was eye-catching/powerful and all must be high on the list of emergencies. Felix Rogers (from Will/Mos U14) was also unlucky not to get a spot.

What stood out was the boy’s composure under immense pressure to kick to a teammate, a huge credit to the training of Travis and other coaches.

What a huge result for the Club to have 10 boys rated in the best 32 in the NSW Combined Independent School System for U15.